Asia (in my mind)

To me the word “Asia” is not the name of geographical area, but more abstract concept that expresses something like “self-organizing life form”.
So it could be reworded as “life” or “city”.
Actually, I used the word “city” for my art works before I use the word “Asia”.
For instance, here were series of my art work in 2011 named “C(imm)”, which stands for “City (in my mind)”.

You might feel that this object should not be something expressed as “city” but some life form.
But to me, city looks pretty much a life form and so does Asia.

I just tentatively named “Asia” for somethings I feel like organic. So you can reword “City (in my mind)” as “Asia (in my mind)”. Actually, in my mind, there is Asia.

My current art works are “A day in Asia”, which I upload onto Instagram every day. They are drawn all day by a Java program that I coded. It takes around 10 minutes for an Asia, so there will be around 140 Asias a day.
But why A day “in” Asia? Although they themselves should be Asia?
Never mind. I’m just making a play on words.

I’m still not sure what is what I call “Asia” is.
Could it be “art”, or could it be “life form”. or even it could “cosmic consciousness”?
Or seeing it from another perspective, you could call it “complex system”.
Anyway, I’ve been considering to express this one that I tentatively named “Asia” by any way that I can, and it was the best way for me to write a computer program to draw it.

When you are trying to draw something by a computer program, you should employ any geometric method to draw it. But it cannot express Asia (in my mind) with those kind of inorganic geometric logics. I employ some technology like fractal geometry in my works to express Asia.

I’m not sure if someday I can tell what Asia is in words. I think I don’t have to express it in words although I really want to express it by my computer program. 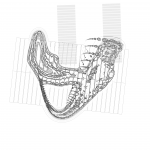 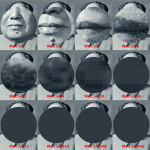 Geometry is metaphysical. There are no straight lines, no smooth surfaces, no solid cubes or spheres in this world. They are just in your brain.Even if you look something has a smooth surface, you will find lumpy points if you look them with high-spec microscope. What reminded us that there are no smooth surfaces was the idea of Fractal.You can easily find lumpy points when you zoom Mandelbrot set.Rather, you will be feeling that everything in this world consists of granular substance. And that recurses in details; – Those ones that you felt “granular substance” also consists of another lumpy …